Identification of a Non-Obvious Contaminant on Polymer Film

A major packaging company was having intermittent problems heat sealing a film used to package paper products. Dyne pens, used to measure surface energy, showed no differences between a “good” film, one that heat sealed appropriately, and a “bad” film, one that did seal correctly.

BTG Labs found that dyne pens cut through a contaminant found on the bad films, leaving the packaging company with a false sense of security and inevitably scrambling to understand why they were disappointing their customer. Water contact angle measurements were able to detect the contamination and provided a better gauge to ensure films were ready for heat sealing.

Figure 1. Water contact angle measurements on known good and known bad films before and after a wipe with isopropanol.

The films were then analyzed using infrared spectroscopy. BTG Labs was able to remove different substances from the films and identified that the bad film contained an amide group that the good film did not have (Figure 2). Amide groups are generally hydrophilic while the polymer film is hydrophobic, so it answered the question of why the bad film had a lower contact angle. But now there was a new question: where was the amide coming from? 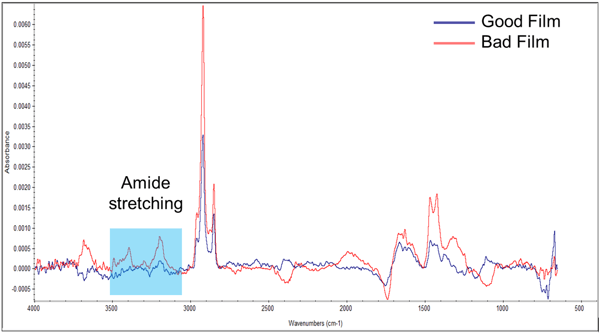 The answer was contained in the film additives. This blown film requires a lubricant, also called slip, in the formulation to reduce friction on the film as it passes through rollers and corona treatment during the cooling process. The slip molecule, a fatty acid amide, contains an amide group, which was identified through chemical analysis. This was present on the bad films, not the good films. These processing aids are known to reduce friction, but can cause challenges for adhesion and heat sealing when present in excess.

There are several reasons why excess slip could appear on the surface of a film. There may have been too much slip added to the film formulation of this packaging. There could have been leftover slip on the rollers from a previous batch of a different kind of film. A hot day can cause more slip to migrate to the surface. No matter the cause of the excess slip, the film manufacturer now has a way to measure and monitor for it because it can be found using water contact angle.

As a final question, the film manufacturer wondered why dyne pens did not pick up on the difference in surface energy between the good and bad films. Slip is soluble in alcohol and many other solvents, including those found in dyne pens. In this case, the dyne pen ink could not indicate the presence of slip because it dissolved the ink. However, slip, while somewhat hydrophilic, is not very soluble in water, and so water could react to its presence without dissolving it (Figure 1).

The film manufacturer invested in a Surface Analyst, a method of measuring contact angle, and now has a means of monitoring excess slip in their process. This tool can gauge different surfaces, so it can be used on the rollers to discover leftover slip residue between batches, change corona treatment levels to change slip migration, determine when a hot day of production is too hot for slip migration, or investigate any other potential causes for excess slip.

For more information about how to discover the source of contamination, especially when it isn't immediately obvious, download our eBook with a step-by-step guide for starting your own investigation. Download the eBook today: Checklist: Adhesion Failure Root-Cause Analysis for Manufacturers. 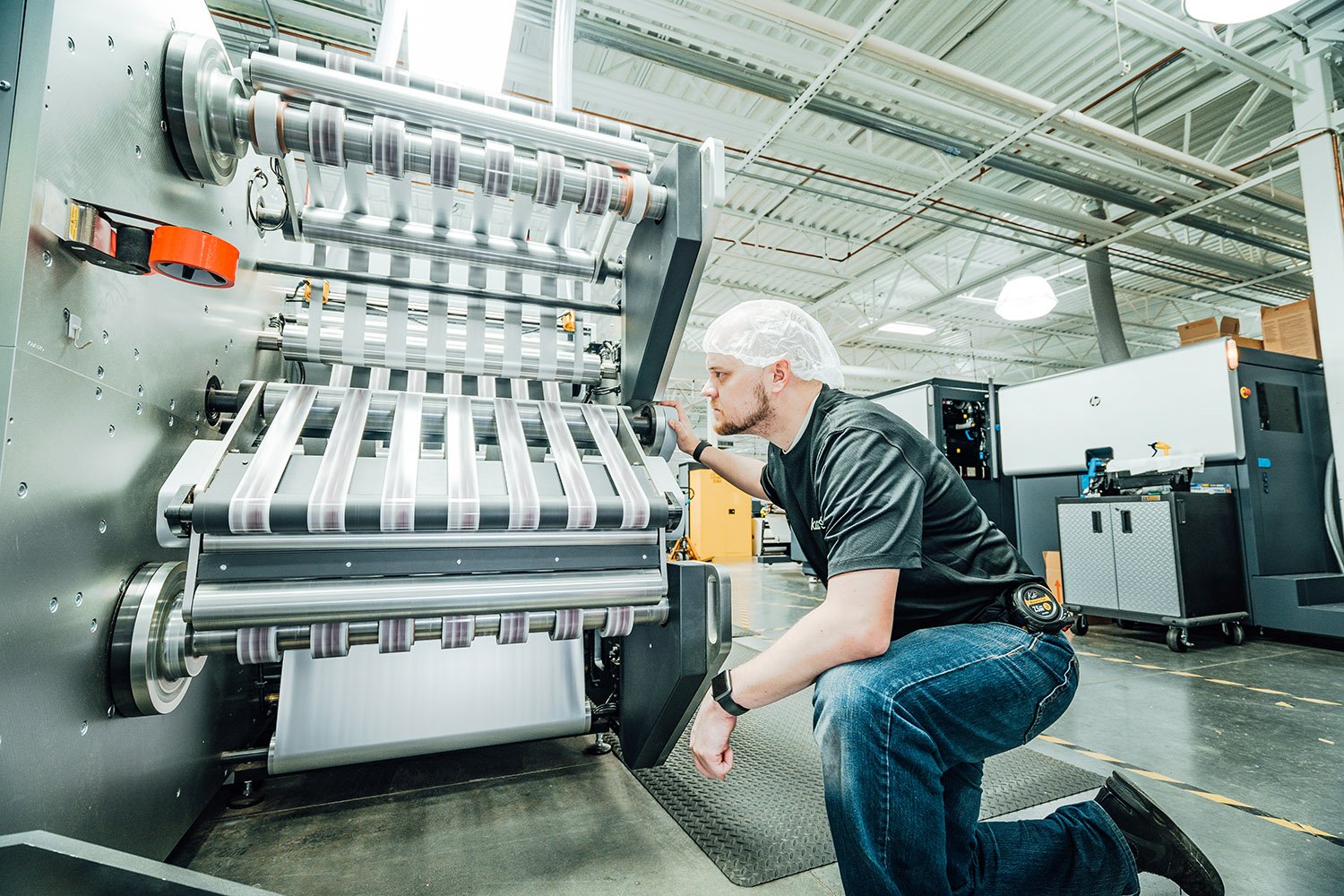 Kala Adopts New Surface Quality Measurement Method for Better Vendor Compliance
Kala is a technological leader in flexible packaging finishing and printing and was built on the principle of continual improvement through process ...
END_OF_DOCUMENT_TOKEN_TO_BE_REPLACED

Identification of a Non-Obvious Contaminant on Polymer Film
A major packaging company was having intermittent problems heat sealing a film used to package paper products. Dyne pens, used to measure surface energy, showed no differences between a “good” film, one that heat ...
END_OF_DOCUMENT_TOKEN_TO_BE_REPLACED
See All Case Studies