Polar interactions between a properly prepared surface and an ink, adhesive, or coating are strong and are responsible for most of the required adhesion of inks, paints, and adhesives. These interactions are greatly affected by cleaning processes and surface treatment. Non-polar (or dispersive) interactions are relatively weak, are insensitive to cleaning and surface treatment, and their measurement requires the use of hazardous fluids. As a result, the best metrics for measuring and controlling the surface properties important for adhesion are the ones that are most sensitive to the polar characteristics of a surface. A single water contact angle measurement provides this sensitivity without the need for multiple probe fluids.

Surface Energy and the Attractions Between Substances

Solids and liquids exist because all atoms and molecules attract each other. Even gases with low intermolecular attraction (think helium or nitrogen) become liquids if they are cooled enough. The same intermolecular attractive forces that hold a substance together will attract other substances, and these forces are what causes the molecules in a paint or an adhesive to stick to the molecules that comprise a substrate.

Examples of high energy surfaces are clean metals or glasses: Paints and adhesives stick to them strongly. Low energy surfaces are exemplified by substances like polyethylene or polytetrafluoroethylene (Teflon™): paints, adhesives, foods, and most other things are not attracted to these surfaces and do not stick.

Controlling a cleaning process or surface treatment process requires a way to measure the surface characteristics that are affected by these processes. There are several ways to do this. We can analyze the molecular composition and structure directly through the use of analytical instruments like an X-ray Photoelectron Spectrometer (XPS) or an infrared spectrometer (FTIR). 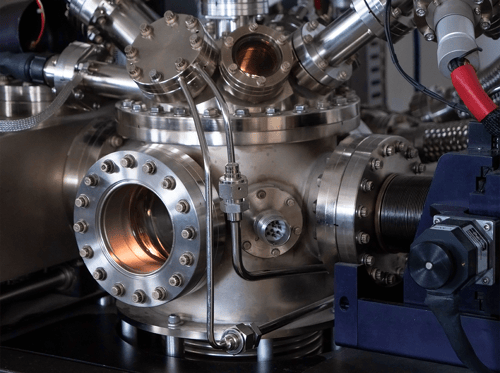 These techniques are expensive and not usually very practical for use in process control in a manufacturing facility. Considering that the ability of the surface to attract or repel another substance is the fundamental property of interest, a direct measurement of this ability is in many ways the ideal control metric.

This concept is the basis of wetting measurements using dyne inks or contact angle-based methods: both are techniques for probing how strongly a surface attracts a liquid. Both methods are commonly used in industry, although they differ greatly in their accuracy and precision.

Dyne inks are the most frequently encountered method. Dyne inks consist of a series of liquids having a range of surface tensions (surface energies) created by mixing two or more mutually soluble liquids of different surface tensions in different proportions. Commercially available mixtures include ethanol and water or formamide and 2-ethoxyethanol. A dye is added to the mixtures to improve visibility on the surface. In use, a thin film of the liquid is spread on the surface to be tested; if the liquid film breaks up into droplets in less than two seconds, the test is repeated with a mixture of lower surface tension.

The contact angles change up or down in a smoothly predictable way with the level of contamination or the treatment level. This is why they provide an excellent metric for process control.

Why Substances Attract Each Other

A molecule consists of atoms that are bound together to form a certain shape. If we were small enough to hold a molecule in our hand and look at it like we would any small object, we would see a cloud of negative charge (the electrons) defining the shape on the outside with the nuclei (containing the positive protons) hidden on the inside of this electron cloud. The electron cloud is always in random, fluid motion. While it has a well-defined average shape, because of its random motion it will be concentrated over one part of the molecule for one instant and concentrated over another part in the next instant.

There is another, much stronger, attraction that can exist between molecules that depends much more on the specific structure and composition of the molecules. Nitrogen and oxygen are elements that attract electrons more strongly than carbon. If oxygen and nitrogen are present in a molecule that is otherwise mostly carbon and hydrogen, the electron cloud tends to concentrate in density around these elements. This makes the part of the molecule containing oxygen or nitrogen more negative, leaving the rest of the molecule slightly positive. These dipoles are permanent, not temporary. These polar forces between permanent dipoles attract each other perhaps 100X more strongly than the temporary dipoles responsible for dispersive forces.

Some polymers, such as polyesters, polycarbonate, or acrylics, have these permanent dipoles as part of their structure. This is why they can frequently adhere well to adhesives, paints and inks with no additional treatment. For other polymers, like polypropylene or polyethylene, oxygen or nitrogen can be grafted to the polymer surface by a plasma, corona, or flame treatment, providing greatly improved adhesion.

Because polar interactions are so strong, the polar character of a surface is very important for adhesion and can be controlled by surface treatments. The dispersive part of the surface energy is small, relatively unimportant for adhesion, and is much more difficult to control. As an example, the accompanying Figure shows how the polar and dispersive components of surface energy of polyethylene change as the total surface energy is increased by plasma treatment. It’s clear in this case that the polar component is affected most by plasma treatment. 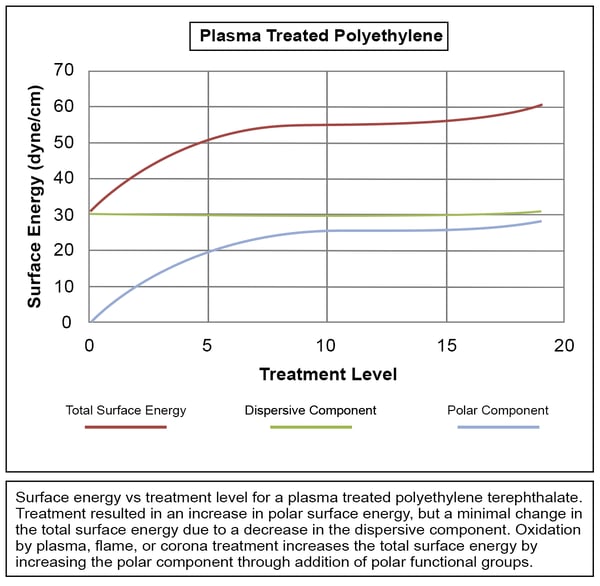 In other cases, as shown in the next Figure, the total surface energy remains relatively constant because the increase in the polar component is largely negated by a decrease in the dispersive component. These surfaces still show excellent improvement in adhesion to adhesives, inks, and coatings, however, because the polar interactions with the coating or adhesive are so much stronger than the dispersive interactions. 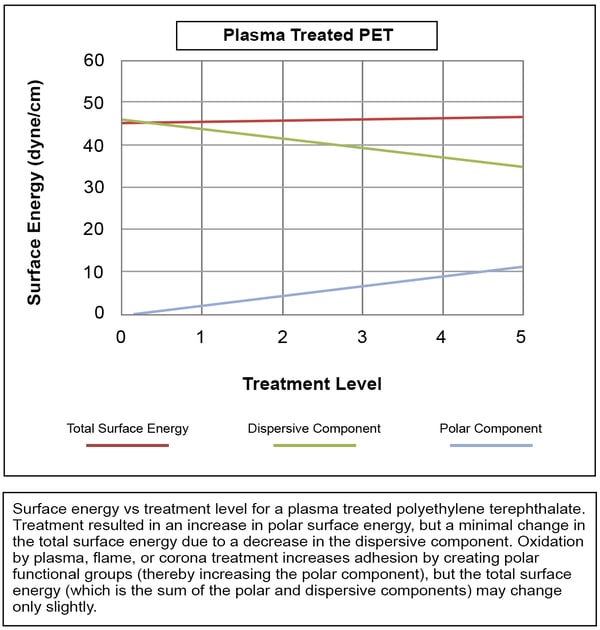 The total attractive force between substances is the sum of the two basic types of attractive forces between substances: the strong polar forces that exist between molecules that have permanent dipoles, and the weak non-polar (dispersive) forces that exist between all molecules. To determine the contribution of each of these two different forces to the surface energy of a substance, we must make contact angle measurements with at least two different liquids that have known (and different) polar and dispersive contributions to their surface tension.

The accompanying Table shows liquids that are commonly used for measuring surface energies, along with the dispersive and polar components of their surface tensions. The two most common liquids used for measuring total surface energy are water (a highly polar liquid) and diiodomethane (which is a highly dispersive liquid with very little polarity). 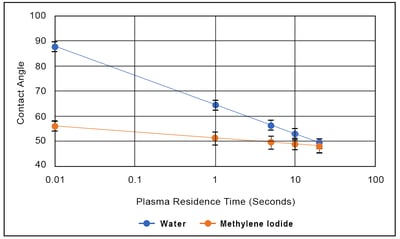 The accompanying Figure shows the effect of plasma exposure time on the contact angles for water and methylene iodide on polypropylene. The contact angle for methylene iodide changes a small amount with plasma treatment (the Table shows that is has a small but non zero polar component to its surface tension), but the change in contact angle it not much greater than the standard deviation of the measurement: this is a poor metric for process control. (Furthermore, the toxicity of methylene iodide make it a poor choice for deploying in a manufacturing environment). On the other hand, this Figure shows that the contact angle of water is very sensitive to treatment level: the treatment is primarily changing the polar character of the surface, and water is an extremely polar liquid. There is a one-to-one correspondence between water contact angle, contamination level, and surface treatment level that make it in many ways an ideal metric for controlling surface treatment.

All substances attract all other substances through at least two basic mechanisms: the weak dispersive forces that exist between all atoms and molecules regardless of structure, and the strong polar forces that depend on the details of the molecular composition and structure. The dispersive component of intermolecular interactions contributes little to adhesion in most cases and changes little with treatment. Because a decrease in the dispersive component of surface energy can mask changes in the important polar component of surface energy, using the total surface energy as a metric to control surface treatments can be misleading.

The polar component of intermolecular attractions is responsible for adhesion enhancement of surface treatments such as corona, flame, and plasma treatments, and can be controlled over a wide range; a simple water contact angle measurement is frequently fills all the requirements for a sensitive process control metric.

Download your personal copy of this paper by completing the form to the right.